Today I had a migraine, and all I could think (besides thank God for the college student who helps us out in the afternoon) as I lay in bed with my head under a pillow was that I really, really need to get away.

My sister is coming to visit next week, which will really help. But how do you get away when you have twins who aren't potty-trained, will put anything in their mouths, climb the furniture, don't usually respond to their names? My husband is not used to watching all three of them, or I'd sneak away for a day or two.

I must brain-storm about this, because I think things are getting harder, as far as caring for the twins. They can say more, they notice more, and they can do more, which includes climbing over safety gates, opening the fridge and, well, I'm sure you know what I'm getting at. Mommy is getting a little loopy, here!

Just to illustrate, here's a picture of the attempt to take a group photo at the twins' birthday party. Some ASD kids made it into the photo, but neither of the twins! 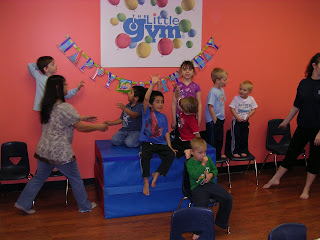 And in other news...

To balance out the disappointing preschool stuff, I should mention that both boys are making unprecedented progress at home and ABA. Yesterday the ABA therapists said that they'd tried G. on matching words to pictures, and he seemed to get it. He won't do picture-matching tasks-- we think he just doesn't see the point. They also started working on writing letters. When they originally tried to get him to trace letters, he got very upset, I guess because it was messing up a perfectly good letter. But writing his own letter isn't so upsetting, or so we hope!

B. is singing up a storm. He is stuck on the line "the mommies on the bus go "shush, shush, shush", for whatever reason (??), and he also keeps repeating "I like to eat, eat, eat apples and bananas". Either one of those things would have seemed impossible a few months ago. And with some encouragement, he'll point to the sentence strips I have around the kitchen and mutter, "Wan nuk (milk), peezh" or "Wanna cookie". That is really, really amazing for me to hear.
Posted by mjsuperfan at 8:26 PM 2 comments:

A Post-It note's worth of progress? Really?

I don't think I've written much about pre-school experience. We took B. out of the program in December, after he actually regressed and became aggressive. we left G. in, and he seemed to enjoy it, although his IEP progress reports read "minimal progress" in all areas, while he was talking and spelling and such at home.

I hate conflict, so I've complained behind the teacher's back, mostly. My impression of her so far have been summed up by the phrase "phoning it in". I've decided I'm fed up.

I emailed last week and asked if she could tell me of some areas in which G. had made progress this year. I heard nothing back, so I emailed again, asking if she had received the first email. She wrote back saying she'd been very busy, and she'd send a note home.

Today I got a Post-it note, yes, a Post-It note, saying that he is sitting better with the group and attending. Also he is doing great with his letters.

This is a boy who knew all his letters, letter sounds and could put his letters in order before PPCD started in the fall! 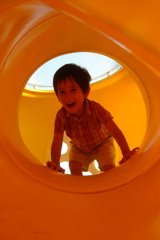 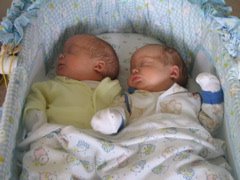